Agree
Disagree
Contact Us
A- A A+
Connect with us:

Immigrant victims of domestic violence are often reluctant to report abuse because they don’t want to be deported — a vulnerability that their abusers are aware of and use to exert control over the relationship.

Domestic violence is a crime of power and control. It can affect anyone, regardless of their gender, age, economic status or cultural background. It can also affect people regardless of their immigration status.  As an attorney with the Survivors Immigration Legal Project (SIL Project) at the Legal Aid Society of Middle Tennessee and the Cumberlands, I work with one of the most vulnerable groups in America for domestic violence — the immigrant population. I am not here to wade into the heated debate about our immigration policies in general, but the fact remains that domestic violence is not something that anyone should have to endure. There should be no exceptions

Immigrants are even more vulnerable

Immigrant victims of domestic violence face a dilemma that others do not. They are often reluctant to report abuse because they don’t want to be deported — a vulnerability that their abusers are aware of and use to exert control over the relationship. The victims also may not understand the English language, may not understand what behaviors are considered abusive in our culture, and crucially, may not know the legal rights they have.

The Legal Aid Society’s SIL Project offers free legal assistance in immigration matters for low-income survivors of domestic violence and sexual assault across 48 counties in Middle Tennessee. Because Nashville is a resettlement center, our immigrant population tends to be quite diverse, covering a wide range of different countries and languages, including a good number of Spanish-speaking clients. The majority of our clients are women, but we also represent several men.

Tennessee ranks No. 5 in the nation for domestic homicide against women, according to a recent study from the Violence Policy Center. In the absence of a larger, systematic solution, at the Legal Aid Society we work with the resources we have to give each individual client the best service we can provide.

We typically assist immigrant domestic violence victims with two legal options available to them: Violence Against Women Act self-petitions and U visas.

VAWA self-petitions make it possible for immigrants to become permanent U.S. residents if they are the victims of battery or extreme cruelty from a spouse or partner, parent, son or daughter who is a U.S. citizen or legal permanent resident. Before this option was created as part of the Violence Against Women Act in 1994, foreign nationals who came to America to marry a U.S. citizen or permanent resident were unable to get a green card without the spouse sponsoring them. Some ended up staying in abusive relationships in hopes of getting a green card, which their spouses would use as part of a cycle of abuse, threatening to report them to Immigration and Customs Enforcement if they didn’t comply with their wishes.

U nonimmigrant status, commonly known as U visas, introduced in 2000, are statuses available to people who have been victims of certain specific crimes — including domestic violence. If a person has been a victim, has cooperated with law enforcement and can show they suffered substantial injuries, he or she can qualify for a U visa. This visa allows the victim to stay and work in the United States and eventually get his or her green card.

The drawback to the U visa process is that it takes an extremely long time, normally about five years, for U.S. Citizenship and Immigration Services to even look at a case. The agency has a cap on the number of new visas it can issue per year (currently 10,000), and the wait list of cases is over 100,000.

Compounding the situation is that those who apply for visas aren’t able to get work authorizations while they are waiting, so they are not able to work legally. The U visa statute directs the U.S. Department of Homeland Security to create a process for those with pending U visa applications to apply for a work permit while they wait for a decision on their case. However, DHS has yet to create such a process. Some members of the legal community have begun looking at ways to force the federal government to follow the law and create a process for people to apply for work permits while they’re waiting — or speed up the adjudication process of the U visa applications.

Years of frustration, but also hope

It can take many frustrating years for our clients to attain legal status. And yet, there is a light at the end of the tunnel.

Many clients come to me at their most despairing moments, but I have seen many of them persevere to achieve happy milestones in their lives. I attended the wedding of a client who I helped in 2005. I helped her with a VAWA self-petition. She came in with her 2-year-old son, fleeing a domestic violence situation. I later assisted her as she pursued U.S. citizenship, and after that, I worked with her now-husband to get his green card. When I attended their wedding, I was struck to see her now-grown son. He has recently graduated from high school and hopefully has a bright future in front of him.

The number of domestic violence arrests in Williamson County during 2018. (Photo: Emily R. West / The Tennessean)

When I see clients who have progressed from a vulnerable stage of their lives and get legal immigration status and then U.S. citizenship, when I see them succeed and become independent, productive members of society, it reaffirms to me why our services are needed. We help provide the stepping stones to stability and independence.

If you or someone you know is a victim of domestic violence or sexual assault, we are here to help. Please call the Legal Aid Society at 800-238-1443.

Chay Sengkhounmany is the lead immigration attorney of the Survivors Immigration Legal Project at the Legal Aid Society of Middle Tennessee and the Cumberlands. 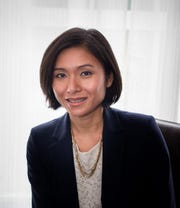